"He's gone. Disappeared into subatomic space. I thought... I'd be able to do something to help. But all his knowledge was wasted on me."
― Ryan Choi

Atom is a superhero film based on the DC Comics superhero of the same name. The film is a sequel to Justice League and Justice League: United. It is the twenty-seventh film in the DC Extended Universe and the fifth film of Phase Three.

The film is directed by Destin Daniel Cretton, written by Henry Gayden and produced by Amy Pascal and Zack Snyder.

Raymond Palmer, CEO of Palmer Technologies, was one of the most awarded alumni at Star Labs. He was on his way to a technological breakthrough before becoming lost to the Quantum Realm. His partner, Ryan Choi, now head of Star Labs, work gruelingly to decode the data Ray left behind with his fellow colleagues. After Star Labs is nearly destroyed and the data stolen, Ryan suits up as The Atom -- with a suit that allows him to shrink in size and gain superhuman strength. He'll have to use all his intelligence and team up with Cyborg to defeat Dwarfstar, Ray's former protege, who is trying to steal the data and sell to the corrupt worldwide corporation, Stagg Enterprises. 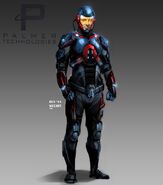